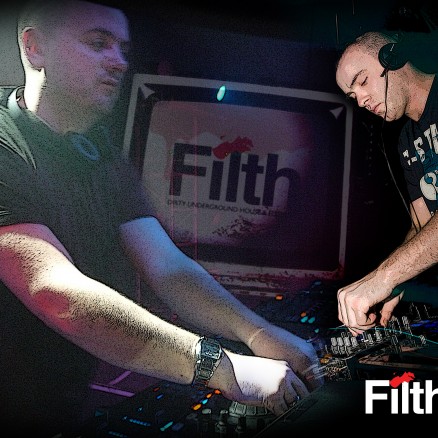 Following the closure of Motion nightclub in 2008 fellow resident DJs Ross Lyall and Andrew McGibbon created the now award winning ‘Filth’, an underground house, techno and electro night which provides clubbers in the Highlands with a welcome alternative to commercial clubs and tunes.

‘Filth’ was an immediate success; moving to the Ironworks – the biggest live music venue in the Highlands – within only two months and seeing the boys establish themselves as front-runners in the Highland clubbing scene. In its first year alone ‘Filth’ hosted nights with huge guest DJs the Audio Bully’s, Jon Carter and Dave Spoon and climaxed the year by headlining the Ironworks on the biggest night of the year, Hogmanay. They have now been hosting the legendary ‘Filth Resolution’ New Year party for three consecutive years.

2010 saw ‘Filths’ status rocket when they beat off stiff competition to win the prestigious ‘Best Club’ at the ICA awards. 2010 saw ‘Filths’ status rocket when they beat off stiff competition to win the prestigious ‘Best Club’ at the ICA awards. They went on to welcome massive names such as Jaymo and Andy George and Alex Metric as well as celebrating home-grown talent in their Halloween party which brought together resident DJ’s from all over Scotland. In August, the Filth boys headlined the Mothers Ruin Stage at the Belladrum Tartan Heart Festival where they played to a massive crowd of revellers and received rave reviews.

2011 saw ‘Filth’ featuring on the same bill as household names Erol Alkan and 2 Many DJ’s at two massive sell out nights. It also saw Andrew and Ross playing on the closing night of the Rockness music festival, which attracted over 35,000 music lovers then returning to the sell-out Belladrum Festival to headline Friday on the new Jock the Reaper Stage.

In 2012 ‘Filth DJs’ continued on the path of success branching out to more venues and returning to Rockness for a second year, headlining the Koppaberg cube and filling it to capacity! In September Filth DJs got together with Pulse Edinburgh to bring Green Velvet to The Ironworks in Inverness. The night was a sell out and a massive success. Regarded by many as being one of the best dance nights the Highland Capital has ever seen! The year finishes for Filth DJs supporting legend Felix da Housecat at the Ironworks and hosting a Filth DJs Christmas Party at Karma Lounge, Inverness and 2013 already has some big events in pipeline!